You Gotta Have Blue Hair 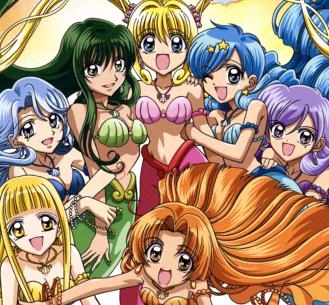 Blue, purple, green, no hair dye required. (Then again, they are mermaids.)
"A Japanese cartoon, eh, James? I saw one of them once. Let's see what I can remember: okay, so first of all, my head would have to be a little bean. With real, real big eyes. Get rid of my thumbs, make me all shiny. My boots would be a whole lot cooler, like robot boots. And for some reason, I got blue hair. You gotta have blue hair. Then there's my mouth: real tiny when it's closed; ridiculously huge when it's open."
— Strong Bad (describing his anime counterpart, Stinkoman), Homestar Runner, "japanese cartoon"

Though there are plenty of ways to differentiate characters from each other, one of normally limited utility is hair color. Human hair has a limited amount of variation, after all, not enough to make everyone on a half hour show once a week easily distinguished. Thus, this trope was born, so that artists could use the full spectrum of color. It's so common that it's mostly considered an Acceptable Break from Reality now.

This is especially common in anime, where characters often have impossible hair colors (and no, they're not a result of dyeing; for the majority of cases, the carpet, really and naturally, matches the drapes). This started with manga series that used distinctive colors on the covers to make characters stand out, even though they all had either dark or light hair in the actual black-and-white pictures; anime brought it to the screen and made it a standard part of character designs.

There are several reasons why artists do this. The first, noted above, is to help distinguish characters from each other especially if their designs are highly stylized and simplified, as with Anime Hair, and other features such as eye shapes (long, wide, constantly closed etc.), pupil shapes (circular, elliptical, slit, etc.), eye colors, tattoos, scars, prominent canines, accessories, mannerism, verbal tics, etc. It may be done to indicate character personality, such as an Emotionless Girl with blue or white hair. It may indicate that a character is unique, if they are the only one in the cast with their hair color. Or it may be done just to suit the artist's taste for variety. In some cases, artists may use Power Dyes Your Hair to explain how a character gets unusual hair when otherwise trying to be realistic in their hair color choices. Also not uncommon is that the Curtains Match the Window.

Some specific colors have Sub Tropes which ascribe certain character traits to them: such as a blue-haired girl being shy, a pink-haired girl being cheerful or passionate or sweet (take your pick) or a white-haired young-man being evil. Bright yellow or orange hair as a stand-in for blonde or red does not count even if the shade of yellow or orange is unnatural, as that falls under Hair Color Dissonance.

A subtrope of Hair Colors. Hair Color Dissonance is when hair is depicted as an odd color, but is supposed to be a normal color (e.g., powder blue standing in for grey); specifically, when hair of a very dark shade of blue or purple is supposed to represent black hair, that's Purple Is the New Black. When the hair color is realistic but is not justified by the setting, that's Implausible Hair Color. For characters with impossible hair styles, see Anime Hair.

See also Amazing Technicolor Population and Mukokuseki. Not to be confused with My Hair Came Out Green. Or, for that matter, The Bluebeard (though the character of the same name was an example).