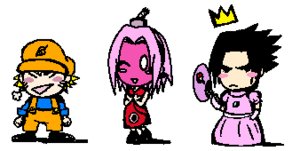 A rather obscure yet popular webcomic that is, as you may have guessed, a crossover between Super Mario Bros.. and Naruto. It goes through the storyline of said anime with a Mario twist and a humorous style.

Despite its popularity, don't expect many updates.

For over a year, it appeared to be an Orphaned Series, but on 4 Novermber 2011, it updated!