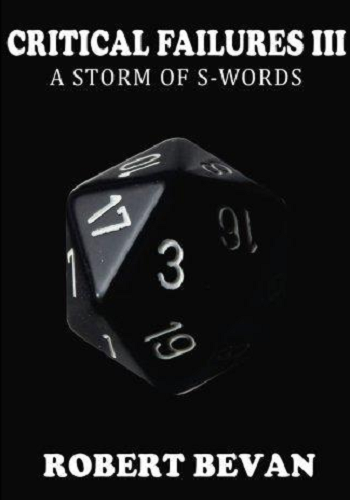 A typical cover for the series.
Caverns and Creatures is a series of humorous fantasy novels and short stories by Robert Bevan. Central to the plot the titular Dungeons & Dragons Expy tabletop game.

In the novels, titled Critical Failures, four friends (Tim, Dave, Cooper, and Julian) get together to play C&C (not that one) and invite a Cavern Master named Mordred, whom they've never met before. Mordred turns out to be an overweight guy in his late 30s, who takes the game way too seriously. He immediately takes a liking to Julian, who's never played before but is willing to learn. However, when the others annoy him by not taking the game seriously and insulting him, he gives each of the players a black 20-sided die for a special roll. They roll, with each die coming up 1... and vanish. They find themselves in the game as their characters: Tim is a halfling rogue, Dave is a dwarf cleric, Cooper is a half-orc barbarian, and Julian is an elf wizard. Here the problem... just before the game turned real, Cooper thoughtlessly decapitated a city guard for no reason, and now the guard's friends are out for revenge.

The four friends quickly realize what's going on and barely survive the pursuit. They find that, in addition to the expected weapons and inventory items, they're also carrying their character sheets, showing their stats (reflecting their current status) and abilities. Also, they discover that Mordred is, pretty much, a god in this game. He can see everything and affect the objects, creatures, and people around them as he wishes.

Not long after that, Tim's sister Katherine come back to find her brother missing and pounces on Mordred, who sends her into the game as well, turning her into an elf druid. Katherine's date Chaz walks in after her and gets sent into the game as a human bard.

The friends have to survive in this world, as everything is now real for them, including death.