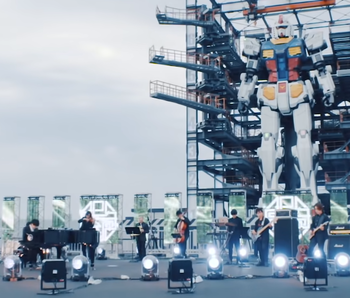 .
As one of anime's longest-running mecha franchises, Gundam enjoyed the performance of countless artists over four decades' worth of series.
Advertisement:

The original series movies in particular were known for creating absolutely classic themes. Just a short selection of First Gundam themes include:

∀ Gundam takes this Up to Eleven with the tradition of great Gundam music teamed up with Yoko Kanno (and a few others who are noted where appropriate) to impressive results: