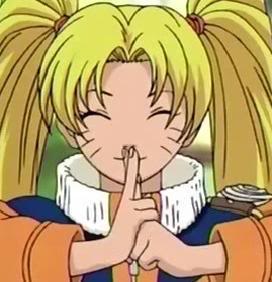 The Heroine
Konoha no Senkou Arashi

is a Naruto Fan Fic by Minion of Set

Takes place in an AU where Naruto has been born a girl. Hinata and Naruto have been friends since early childhood and found out the secret behind which teams are assigned. Hinata strives to become the Top Kunoichi of the graduating class while Naruto permits herself to be the Dead Last of the class.

Similarly to canon, Uchiha Sasuke is the Top Shinobi of the graduating class. Hinata, Naruto, and Sasuke end up on Team Seven under Hatake Kakashi.

Currently on hiatus so the author can focus on his original work.

This fic contains examples of the following tropes: