Film / A Kid From Tibet 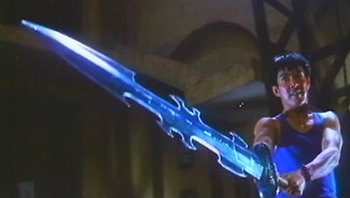 Yuen Biao makes sure you get the point that he's directing and starring in this movie.
Advertisement:

A Kid from Tibet is a 1992 fantasy-martial arts epic starring Yuen Biao, in his first, and only, directorial effort. Co-starring Michelle Reis (Fallen Angels), Nina Li (Miss Jet Li), Biao's frequent collaborator Yuen Wah and Jackie Chan in an 8-second cameo, the film blends urban fantasy elements made popular by Highlander released a year prior and mixes them with Hong Kong martial arts and over-the-top choreography, resulting in some... let's say, interesting results.

Yuen Biao plays Lo Ba Wong La (Wong La the practitioner), a protege of a Tibetan monastery sent to Hong Kong to find an enchanted artifact called the "Babu Gold Bottle", which Wong La had its cap and is tasked with uniting the cap and bottle before either falls into the wrong hands. But when the evil Black Section Cult, led by the Black Section Sorcerer (Yuen Wah) and his sister (Nina Li) also seeks the bottle , Wong La had to take them on in an epic battle.

While its a shame that Yuen Biao never get to fight Jet Li during the peak of his entire career, at least over here he gets to fight Jet Li's wife. Ehh, close enough, right?

Tropes in A Kid From Tibet: