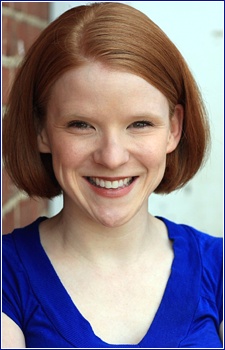 Maxey Whitehead (born June 15, 1981 in Dallas County, Texas) only joined Funimation as a regular voice actress a few years ago, but is already making an impact, landing many major roles in huge titles. She has a background in live theatre and entered the fandom very suddenly. Her first role in ADR acting was Antonio in Romeo X Juliet, but her break-out role was particularly demanding: Alphonse Elric in Fullmetal Alchemist: Brotherhood — Aaron Dismuke matured and he could no longer play the role. She used the same bowl that Aaron used to speak into while recording as the character. So far, she usually gets cast as soft-spoken, emotional woobies and/or young boys.