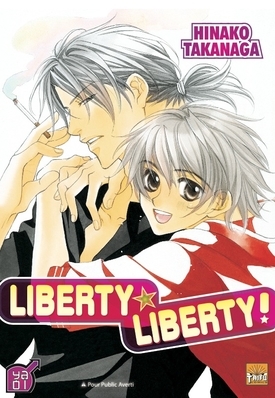 Liberty Liberty! is a Yaoi manga by Takanaga Hinako, author of The Tyrant Falls in Love, Challengers, Awkward Silence and Little Butterfly.

Kouki is a cameraman working for a small TV network of sorts. Their little station is trying to film and capture a stalker who likes to root through a certain celebrity's garbage and send nasty fan mail. One night Kouki comes across someone lying in the garbage; is it the stalker? No, it's a young lad called Yaichi... fall-down drunk and barfing everywhere.

Kouki isn't the nicest chap around but he can't exactly leave as if nothing's happened, especially since Yaichi broke their station's one functioning video camera.Kouki lets him stay the night at his place, hoping to get some money out of him for a new camera, but since Yaichi has no money, this doesn't exactly work out and Kouki lets him work at the station until he can get a proper job.

This being a Takanaga Yaoi, romance, hilarity and complete d'awww ensue.