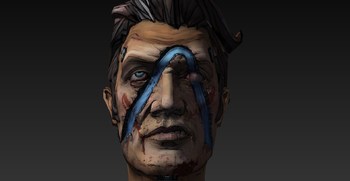 No wonder he wears a mask...
Advertisement:

Pandora is a Death World, and few games display this horror in all its glory more than Borderlands 2 and its tons of DLCs.

Captain Scarlett and Her Pirate's Booty

Commander Lilith and the Fight for Sanctuary

Headhunters packs and other DLCs