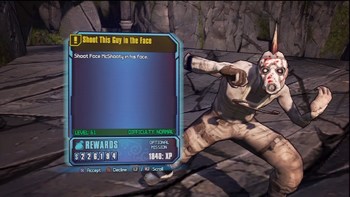 His name's Face McShooty. I wonder what he wants?
Borderlands 2 is a Black Comedy that is absolutely hilarious. You should focus on that, to avoid the horror and trauma of the game.
Advertisement:

For an index of funny moments in the franchise, click here.