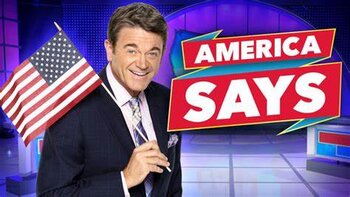 Guessing how America filled in the blanks.
Advertisement:

GSN Original Game Show that marries Family Feud, Match Game and Talk About to create a format that challenges contestants to match America on a series of survey questions as quickly as possible.

Two teams of four take alternating turns attempting to clear a board containing the top seven answers to a survey posed to an unidentified number of Americans (ex. "We asked America... when I think of TV Tropes, I think of _____"). The first letter of each answer is given, with the length of the blank indicating how long the word is; multi-word answers will have the first letter of each word listed. Each team has 30 seconds to guess as many answers to the question as possible, one player at a time. Each player is allowed to continue guessing as long as he or she gives right answers; once a wrong answer is given, play passes to the next player on that team. A 5 second penalty is assessed to the team if any player who talks out of turn. The round continues until the 30 seconds have expired or a team sweeps the board. Each correct answer is worth 100 points; clearing the board earns the full 700 points plus an additional 1,000 point bonus.

If a team leaves any answers on the board, the opposing team then has a chance to guess the remaining answers for 100 points apiece, and may continue to do so until they get one wrong or finish the board.

Three rounds are played, with the second round being worth double and the third worth triple. The team with the most points at the end of the game wins $1,000 and advances to the Bonus Round where they have a chance to split a $15,000 grand prize.

We asked America: "When I think of tropes that America Says provides examples of, I think of..."