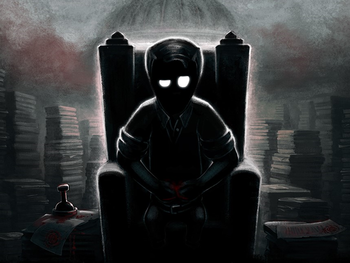 All hail the Wise Leader!
Advertisement:

In the sequel to Beholder you are Evan Redgrave, the estranged son of Caleb Redgrave, one of the big shots at the Ministry of the Great State, who ended up having an accident on 37th floor of the Ministry building just a few days prior. As you arrive to your first work day, you're greeted by a well-mannered gentleman named George Hemnitz who will introduce you to your new position, and give you the first piece of a trail of clues that lead to your father's legacy, especially his final work: Project Heimdall.

Soon afterwards, you will be dragged into a power struggle at the very core of the Great State, with major players making their moves from the shadows, with their own ambitions and agendas trying to influence you, while the colleagues on your level will all be dealing with some sort of personal struggle such a high-stress environment does little to help with.

As you set on the path to higher floors, more power, and the truth about your father's Magnum Opus, will you help those you meet along the way, or will you become just another ruthless upstart who doesn't shy away from treachery in his ambition to make it to the very top, perhaps even usurping the Wise Leader himself?

Like its predecessor, this game draws heavily from works such as Papers, Please, or This War of Mine, but the building management aspect has been replaced by a job at the very center of Great State bureaucracy. With the bills you need to pay and authority you need to gather within the Ministry to advance in the ranks, the path to the top won't be a cakewalk. A sequel, Beholder 3, was released on March 3, 2022.