A grad student at "Ohio Research University" who works under Dr. Lambha. Thanks to an accident involving her klutzy ways and the doctor's new "prototype genetic infusion chamber," she has found herself imbued with superpowers derived from spiders. This includes having the proportional strength of a spider ("GIRL ABS!") and super-healing along with six arms and high-tensile spider thread that shoots out of the base of her spine. However, she's not the only superpowered person around.

A girl wearing an anime-inspired Meido outfit with the power to fly and shoot missiles. Turns out to be just a powered suit for a girl suffering from the very real ALS disease. While the suit (or more specifically, the headband) allows her to accomplish superhuman feats, the disease means she only has a couple years left to live. Korean and a big fan of the anime Mahoromatic, whence she got the inspiration for her outfit.
Tiger

Formerly a police officer who was given superpowers by the previous "Tiger" after he was shot during a robbery gone wrong. His main traits include super-strength and a short temper, but he knows a lot of hidden superhero history. His Canadian ex-wife divorcing him over his alter-ego led to an irrational prejudice against Canadians.

A descendant of the original Anne of Green Gables. Despite being a male, his family made him wear the girly outfit, on the basis that Green Gable is a Legacy Character passed from mother to child, and just because that child is a boy is no reason to end the tradition.
Werewolf of London, Ontario

A Canadian werewolf who usually goes by the name London. Annoyed that there aren't many high-level superhero jobs in Canada.

A French-Canadian catgirl with nine prehensile tails. According to Heather, she was working at an animal shelter and somehow found a magical cat that hid there since the War of 1812.
Captain Alberta

A former member of the Legion of Canadian Superheroes who was sent to a three-month sensitivity training camp. He returned prematurely to find Minerva had taken his spot on the team and immediately swore revenge.

A teenaged girl who claimed to have come up with the alias "Spinnerette" before Heather did. She used magic and instructions gathered from Dungeons & Dragons books to turn herself into an avatar of the spider queen Lolth, but was defeated by Spinnerette. She got off with a relatively light sentence as she was legally considered a minor in the eyes of the US justice system, but later made a comeback.
Dr. Universe

An objectivist Evil Genius who is working with Dr. Lambha on the genetic infusion chamber project. Dr. Universe was once a respected scientist researching the "Cherenkov-Kirby Reaction" but reportedly turned evil after he read a Ayn Rand novel. The Government tried to shut down his free energy research, based on the suspicion that he was a Communist sympathizer, and abducted him and his research assistant (Greta). He read the novel while in captivity.

Dr. Universe's well-endowed assistant, she and Heather initially do not get along. Greta has the power to create her own localized gravity fields, which lets her pick up and throw objects of almost any size.
Colonel Glass

A member of the Korean People's Army with telekinetic control over glass, and who has a past with Mecha Maid and her family.

A reality-warper capable of "editing" multiple realities into one.

Heather's well-endowed roommate and confidante at school. Sews outfits for Heather and generally puts up with her antics while she stumbles around trying to get the hang of her powers. Also leans on the fourth wall on occasion by pointing out how impossible some of the spider powers are. Of Indian descent (she wears a bindi on her forehead).
Dr. Lambha

The main researcher at the lab where Heather works. He worked with Dr. Universe on the construction of the Genetic Infusion Chamber.
Buzz

A security guard at the university. Currently dating Sahira.
Darien

The cute guy next door. Both he and Heather have a mutual interest in each other... but things just keep getting in the way. She dates him once, but then ditches him for Marilyn.
Patti Winters

A local reporter for Channel 4 who seems to focus on following superhero related stories. Also the host of her own morning talk show.
Park Seong

Mecha Maid's faithful butler. The Alfred to her Batman.
Guinness

A Class V demon working as a secretary at the Underworld Department of Labor.
Tom

Case's old roommate, now employed as a blacksmith in Hell.

A warmongering general with great disdain for independent superheroes of any and all stripes and colors. 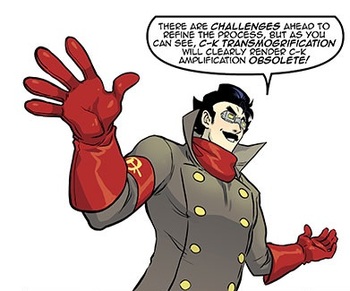 You are obsolete, Dr. Universe! Behold the superiority of Communism! BWAHAHAHAHA!
A rival "scientist" to Dr. Universe, with an assistant that's a rival to Greta.
Rita and Manya 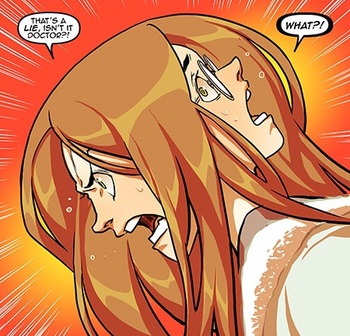 Why didn't you even ask?!
Twin sisters working under Demikhov that were eventually shown to have been surgically fused together at the back of the head.

Cerberus and guardian of Hell whose job is to capture wayward evil spirits and bring them back. She was eventually fired from her job and joined the Legion of Canadian Superheroes.
Mr. Canus

One of the founding fathers, lost in time. After an incident where he saved Hitler's life, a convenient time traveler dropped him off in 2002 to prevent the Subprime Mortgage Crisis. He failed, but makes up for it via superheroics in other areas.
White Heron

Another alternate universe version of our Spinnerette.
90's Mecha Maid

The oldest variant of Spinnerette from an alternate universe, both by timeline and age.

The oldest version of Mecha Maid from an alternate universe.

An elderly Nazi plotting to resurrect Adolf Hitler by infusing a clone with his soul.
Maus

An aspiring supervillain that attacks a bus full of kids.
Delta Wave

Another alternate universe version of Evil Spinnerette.
The Sheilas

A North Korean super soldier dispatched to hunt down Kim Jeong when she defected.
Wendy G
A wendigo acting as Betty Brown's Lola Rue coach, and the antagonist of Issue 31.