These are the characters for the series Science Ninja Team Gatchaman.

Tropes common to the team: 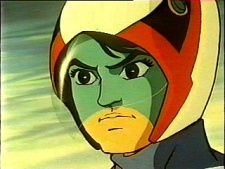 The Leader and tactical expert of the Science Ninja Team. He is the eponymous “Gatchaman” of the show’s title. The Hero. He has a strong sense of justice and is very dedicated to his duty of bringing down the Galactor organization and bringing peace to the world. He also wishes to find his lost father, who he believes to have faked his death from a supposed plane crash (rightfully so). He is a flashy fighter, and often uses elaborate techniques in his moves. His primary weapon is a bird shaped bladed boomerang. He is an accomplished pilot, and owns a Cessna plane that transforms into the G1 jet plane while on duty, serving as his personal transport. 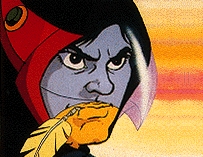 The weapons and marksmanship expert of the team. The Lancer. He is driven by his desire for revenge against the Galactor organization for taking his parent’s lives and almost taking his. At his core, he is a good guy who has his teammate’s backs, even if his methods are rough. He is the most brutal fighter on the team, and quick to go on the attack. His preferred weapon is his Grappling-Hook Pistol that can fire a hook line from the front and the back. He is also the most common user of the ninja team issued feather shurikens. An excellent driver, his personal vehicle is a stock car that transforms into the G2 high powered racer. 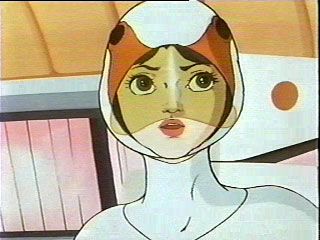 The technical and demolitions expert of the team and the sole female member. Both The Smart Guy and The Chick. She is generally very kind, compassionate and empathetic towards others (but sometimes temperamental). She exhibits skill in mechanical and electrical engineering, along with creating/handling explosive devices. She is a graceful fighter who can easily take out the average Mook in a fight with her swift, acrobatic movements. She wields a yo-yo in combat that contains a concealed blade, and can be remotely detonated via wire signal. She is a skilled motorcyclist, and her personal bike transforms into the G3 “Sonic Car” motorcycle that can ride on water surfaces in addition to land. 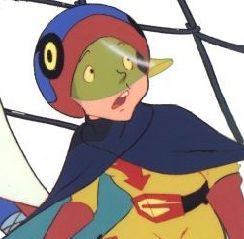 The youngest member of the team and the reconnaissance expert. He is Jun's adopted younger brother. He is The Smart Guy from a wiseguy standpoint and the Kid-Appeal Character. He is clever and resourceful, and has an especially strong rapport with children and animals. His young age can sometimes affect his self-confidence, and he'll go out of his way to prove himself. Due to his smaller size, Jinpei focuses on being as quick and agile as possible, even more so than his teammates. He uses bolos in battle to trip up and sabotage his adversaries. They can also be used as timed explosives. He knows how to drive and owns a small buggy that transforms into the G4, an all-terrain mini tank that is designed to operate in any environment. 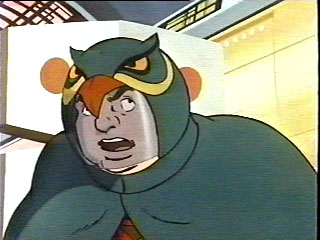 The pilot of the God Phoenix, the team’s group transport, battle aircraft, and docking bay for the other G machines. The Big Guy. He is easy going and friendly, being a gentle soul in nature. He uses sumo techniques in fights that take the fullest advantage of his large amount of bulk and raw strength. He carries a Grappling-Hook Pistol that is smaller than Joe’s, but prefers to use his body as a weapon. The God Phoenix doubles as his personal transport when not combined with the other G machines. 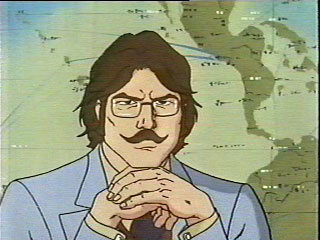 He is the Head Scientist for the International Science Organization (ISO) and the one who assembled the Science Ninja Team. The Mentor. He raised most of the team members and gave them their training. The team takes orders from him and he supports them by researching solutions to whatever issues they face. The Science Ninja Team is initially headquartered at his mansion until their underwater Crescent Coral base is completed, which Dr. Nambu oversees. 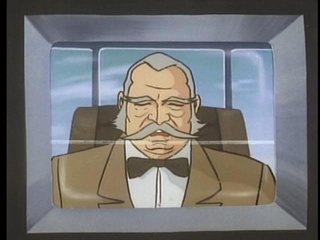 The head of the International Science Organization and the person Dr. Nambu answers to. He is the only other man who can give the Science Ninja Team orders. The Big Good. His role in the show is greatly reduced compared to Dr. Nambu's. He only really gets involved with the team's affairs when his life or the ISO is in immediate danger, or Dr. Nambu is otherwise unavailable. 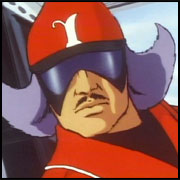 He is the mysterious leader of the fighter squadron that bears his name. In reality he is Ken's father, who has been working undercover for several years.. The Sixth Ranger. His team is a called upon to work with the Science Ninja Team in dealing with certain Galactor schemes. Red Impulse flies with two subordinates, Masaki, and the mute Oniishi.

The masked head of the criminal organization Galactor. He is very keen on his own self interests, and will betray even his own subordinates for self preservation and to achieve his goals. He was promised to be the ruler of the Earth once it is subjugated by Galactor, and eagerly strives for day it will happen. His specialty is disguises and he will often impersonate important figures in his schemes. 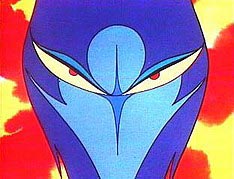 The true power behind the Galactor Organization. The one who fused twins to create Berg Katse. The Big Bad. He came to earth thousand of years ago and lay dormant, waiting for the right time to begin his quest to subjugate the world. He spurred the creation of the Galactor organization and uses it as his tool for world domination.
Galactor Soldiers 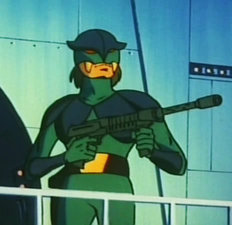 They are the work horses of the Galactor organization and make up the vast majority of its army. The Mooks. They are dressed in the same masked green outfits, though some higher-ranked soldiers wear different colors. They are largely made up of degenerate men that were recruited from prisons and slums throughout the world. They are primarily armed with machine guns, but some use knives and shield weapons. Most of the time, they are cannon fodder for the Science Ninja Team, since their teamwork is very poor and their accuracy when firing is low. 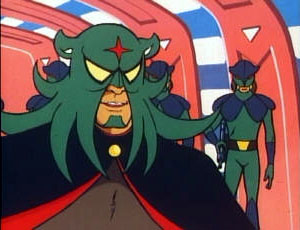 They are the leaders of the Mooks who report directly to Katse. The Mook Lieutenants. They are normally dressed in outrageous costumes in line with the theme of the Mecha of the Week Galactor sends out to antagonize the public with. They are almost always killed off by the end of their featured episode, only to be replaced by a new one in the following episode. 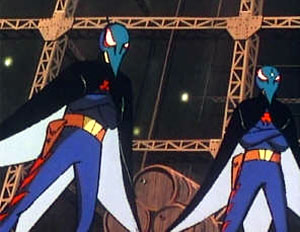 They are Elite Mooks who were formed with the specific purpose of countering the Science Ninja Team and are dressed in similar outfits. They pose a slightly larger threat than the normal soldiers and have better teamwork, but ultimately don't give the team that much more trouble. They use either machine guns or claws in battle. 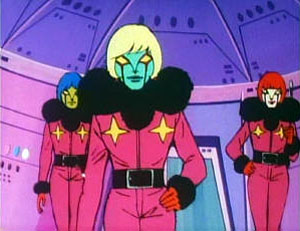 The all-female assassin squad of Galactor. Elite Mooks who are the most dangerous among Galactor's ranks. Compared to the others, they are lesser in number. They work alone or in small groups, and are dispatched to target specific individuals. One was responsible for killing Joe's parents (and almost killing him). They travel in cars that can convert into flying machines and are headquartered in the "Devil Star" flying base where their machines dock. Their most common weapon is rose explosives, but they also carry lipstick and fingernail bombs, along with machine guns. They are commanded by the Onna Tachio (Female Captain), who is really Katse in female form.