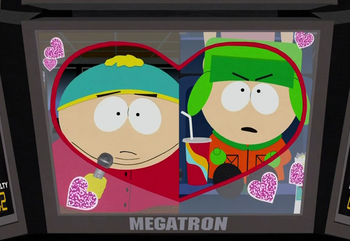 "I swear! By the moon and the stars in the sky! I'll be there, Kyle!"
Advertisement:
open/close all folders
Stan/Kyle (Style)
South Park has many jokes concerning Stan and Kyle's deep friendship. And even when it's not part of a joke, a lot of their deeper moments simply reek of Ho Yay. "Style" is the most popular slash pairing in South Park fanfiction.
Cartman/Kyle (Kyman)
Since they spend most of their shared screen time being at each other's throats and tend to treat each other as reluctant old friends at best, Kyle and Cartman don't usually fall into this... on Kyle's side at least. On Cartman's side, however, he can be a little too obsessed with Kyle. A lot of his antics involve humiliating Kyle sexually in some way. And while it sure ain't a healthy relationship, the interaction between these two rivals does get very intimate sometimes.
Cartman/Butters (Buttman)
Butters/Kenny (Bunny)
Kenny and Butters have had several moments themselves throughout the show, as they are shown to be very close. Considering the two were a very popular pairing in the show's slash fandom long before they had any significant interaction, it's plausible this could be Ascended Fanon.
Advertisement:
Jimbo/Ned (Jimbed)
Other