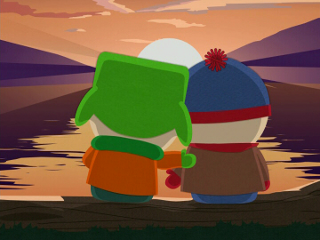 Wait, this is a "Heartwarming Moments" page, right? What the heck is it doing in a show like South Park? Believe it or not, even a show like South Park, with its killing Kenny, F-bombs, and Black Comedy, has its emotionally redeeming moments as well. One would be surprised about how much more there is to the show than blatantly offensive comedy.

For moments specific to a particular entry, go to the following:

"An Elephant Makes Love To A Pig"

"Cartman’s Mom is a Dirty Slut"

"Do the Handicapped go to Hell?"

"Simpsons Already Did It"

"A Ladder To Heaven"

It's Christmas In Canada

Season 8
Up the Down Steroid

You Got F'd in the A

The Death of Eric Cartman

The Return of Chef

Season 14
You Have 0 Friends

It's a Jersey Thing

Coon vs. Coon and Friends

The Last Of The Meheecans

Goth Kids 3: Dawn of the Posers

Season 19
Where My Country Gone

The City Part of Town

Douche and a Danish

A Boy and a Priest

The Problem with a Poo

Time To Get Cereal