Brought Down to Normal 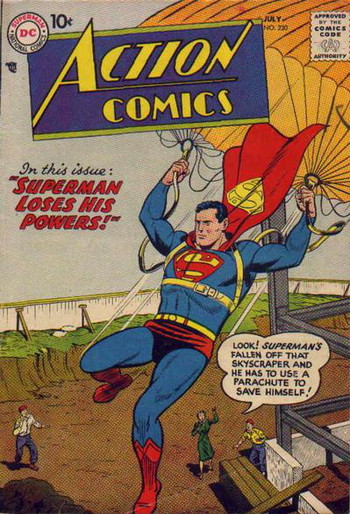 "Why is there a headache where my expanded consciousness should be? And what happened to my other eight senses?"
— Black Mage (post-Lord of Hell), 8-Bit Theater
Advertisement:

A character who has some kind of highly developed or superhuman ability loses it for an episode, and has to experience life as an average Joe. Often, the character actually enjoys the experience of being "normal". Otherwise, they will hate it and understand how hard it is to have no superpowers to help you, becoming Useless Without Powers. May result from being a Broken Angel.

By the end of the episode they get their skill back, usually just in time to save the day with it. After all, it may be interesting to see the hero without powers for a little time, but the people are Just Here for Godzilla, and want to see the hero in full action. A possible solution occurs when the hero has Got the Call on Speed Dial.

Frequently comes with An Aesop about how it's actions, not powers, that make one a hero, or Power Loss Makes You Strong.

Super-Trope of Depower, which is when this happens to a character permanently or for an extended period of time.

The polar opposite of "Flowers for Algernon" Syndrome. Contrast with Always Need What You Gave Up, Sense Loss Sadness. When an already badass character with no superpowers gains them, that's Empowered Badass Normal.

Compare Fight Off the Kryptonite. If the character can still kick major butt, they've been Brought Down to Badass instead. For when an immortal character is brought down to mortality, you'll want Mortality Ensues. When a supernatural being becomes normal by becoming a human being, see Humanity Ensues.

Rapunzel and Cassandra lose their powers of the Sundrop and Moonstone, respectively.

Rapunzel and Cassandra lose their powers of the Sundrop and Moonstone, respectively.