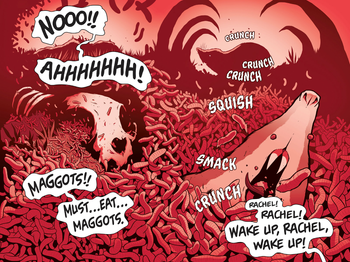 Wake up, go to school, save the world... by morphing into different animals and fighting a violent maniac, walking salad shooters, and giant cannibalistic centipedes. What Do You Mean, It's for Kids? Seriously, Animorphs's motto might as well be, "Scaring small children since 1996."
Advertisement: