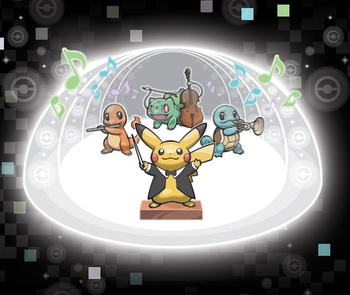 For the Super Smash Bros. remixes, see here. Smash Bros unite! Now, back to the awesome music! Unmarked spoilers below.

Pokémon Title Theme
Red/Blue/Yellow
Gold/Silver/Crystal
Advertisement:
Ruby/Sapphire/Emerald
Themes that debuted in FireRed and LeafGreen are in those games' folder.

The SNES-like audio for the GBA did wonders for the music of Pokémon, and the whole soundtrack doesn't disappoint. Plus, you can experience those glorious trumpets!

Image Songs
Openings
Endings
Pokémon Live!
For those who aren't aware, there was a very short lived Pokemon Musical! And they did broadway versions of some of the songs from the anime while adding a few of their own. And it was awesome!
Series BGM
Movies
Pokémon Origins
Pokémon Mystery Dungeon specials
Miscellaneous