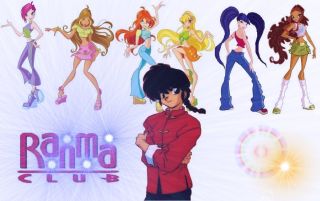 And he got with ALL of them?

Nodoka: ENCHANTIX!
Ranma: M…Mom…? Is that… really you?
Nodoka: Do you see now, Ranma? I’m really a Faerie.
Ranma: So how long have you been a Faerie, Mom?
Nodoka: Ever since I was born, Ranma. I suppose this is more shocking than a Jusenkyo curse, huh?
Ranma: Yeah, I suppose… Hold on, does that mean that I’m a…
Nodoka's revelation to Ranma about his heritage.

is a crossover between Ranma ½ and Winx Club by Frequent Reader.

Diverging from the ending of Season 3 of Winx Club, Valtor survives and tries to kill the Winx while they were weakened, but the Specialists die in self-sacrifice in order to save them. To "revive" them, Faragonda commits a taboo and heads to Earth in the past where she requests assistance from an old student, one Nodoka Saotome who happens to be pregnant. The Specialists' souls are infused into an unborn Ranma where their personalities and traits mixed to make the Ranma we all know and love. After the events of Ranma ½, Nodoka tells Ranma about his half-Faerie heritage and offers to take him away from his hellish life to start anew in Magix. He accepts and now attends Alfea, then proceeds to get a harem in the form of the Winx. Much craziness and adventures ensue as Ranma adjusts to his now magical life.

This fic was made as a break from the usual crossovers of Ranma with Sailor Moon. Also to show a What If? of Ranma being in this setting, and more importantly, how he'd react to girls who all love but don't fight over him.