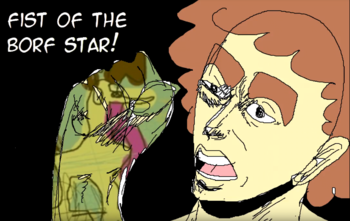 Fist of the b0rf Star is a series of Youtube videos created by Lycan Jonze. It is a fan-made parody of PilotRedSun's Garfielf, which in turn is a parody of Jim Davis' Garfield. As the title suggests, the entire series is heavily based on the anime Fist of the North Star.

The series chronicles the adventures of Jon Arbuckle, and his battles against his pet cat/nemesis Garfielf. As the story progresses, many characters from various newspaper comic strips make an appearance. Just like its predecessor, the video is notable for featuring extremely bizarre art, synthetic voices, and frequently misspelled words.

Initially made as a so-bad-its-good Garfield anime parody, the production value increased drastically in the later videos, gradually shifting from a simple Gafielf fan-video to an extensive webseries in its own right. Fist of the b0rf Star is considered a Cult Classic, spawing several fan-videos of its own.

In January of 2018, Lycan Jonze deleted his channel along with all of his videos. Thankfully, Fist of the b0rf Star has been recovered and reuploaded by fans. The entire series can be viewed here.

where he reuploaded all of his old content, including finished versions of the missing episodes. Unfortunately, as of December 2020, that new channel has also vanished, though fans have once more taken to archiving the project, as can be seen with the missing episodes here

, though they are not in their original order. The saga is also currently receiving a more dynamically-animated adaptation by Daninjerooni

, with the compiled first half of the series viewable here.

Fist of the b0rf Star provides examples of: