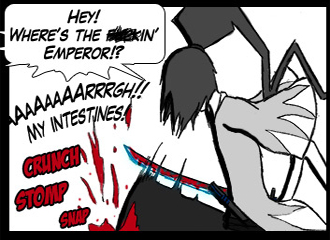 That guy? He's the protagonist.

In an Alternate Universe Earth, there are two types of men: those who seek and gain power, and those who get their asses kicked thanks to a lack thereof. Some speak of a mystical artifact called the Power Drive, which can supposedly grant incredible power to the one who holds it. Enter Hotaru Myoujou; renegade, Rōnin, and total jerk. Loads of mindless violence and action abound as he searches for the Power Drive.

This is a webcomic created by troper Blackmoon. Operates on the principle of Rule of Cool, and frequently suffers from Schedule Slip. Especially after the project was abandoned.