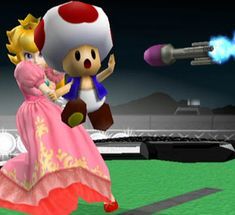 Not in the Face! NOT IN THE FACE!

For examples throughout the series, check this page.