Recap / Batman Beyond S2 E24 "Sentries of the Last Cosmos" 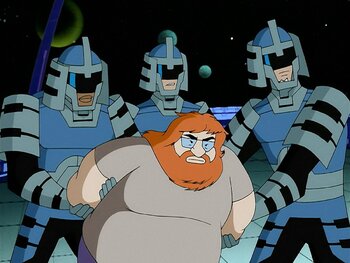 Terry and Max's geeky friend Corey Cavalieri is obsessed with the virtual reality arcade game Sentries of the Last Cosmos, playing it so much that he has achieved the highest score in Gotham. Lamenting that his skills in the game do him no good in real life, he suddenly gets an invitation to Sentrycroft, the private estate of the game's creator Simon Harper. There, Harper inducts Corey and two other dedicated players as real Sentries, asking them to serve him in his ranks. However, the "missions" that the Sentries are given by Harper turn out to be various crimes, forcing Batman to intervene and investigate the matter.