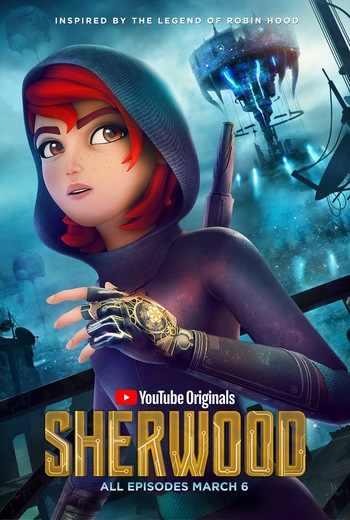 Robin with the DNA Gauntlet in front of the Citadel.
Advertisement:

Sherwood is a 2019 animated series released on the YouTube Red streaming service. Based on the legend of Robin Hood, the animated series follows 14-year-old Robin and her friends’ battles with the wealthy Upper City in their efforts to overcome inequality and fight for justice.

It premiered on January 15th, 2019. When the COVID-19 Pandemic hit and various platforms and companies made a lot of media freely available to encourage people to stay home in the early months, the paywall over the series was dropped, and it can now be seen for free.

Just leave. I don't need you. My mum was right after all — my father is dead.
Finally, you chose the right side
Now I'm watching the light leave your eyes