Tropes that describe the characters of The Legend of Zelda: Phantom Hourglass.

As this game is a direct sequel to The Legend of Zelda: The Wind Waker, be aware of unmarked spoilers, especially in regards to the true identity of some of the main characters. This includes spoilers for this game's Final Boss. 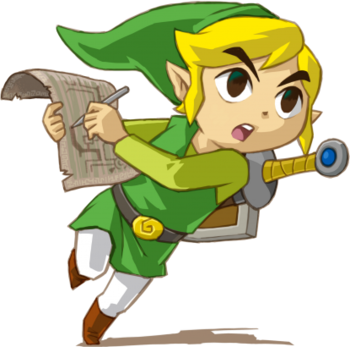 After losing Tetra to the mysterious Ghost Ship, this young hero embarks on an ocean-wide quest to free her, and later, the Ocean King.

He is the same Link from The Legend of Zelda: The Wind Waker. For more information on him, see that game's character sheet. 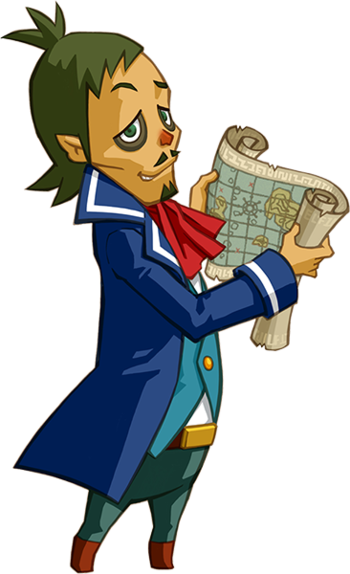 The captain of the steamship Link uses in Phantom Hourglass. He's a complete coward, and only agrees to help Link when he learns of the possible treasure involved. He provides most of the comic relief in the game. 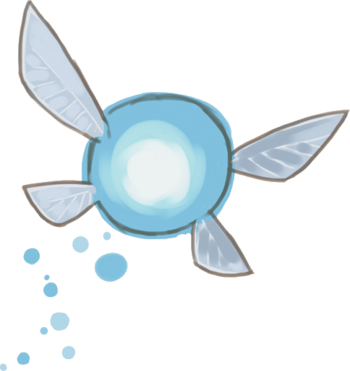 A white fairy with Laser-Guided Amnesia, who found Link on the shore. She helps him throughout the game.

Servant Spirits
A trio of fairy spirits who ordinarily serve the Ocean King, but have all been sealed away by an unidentified evil force. Link must find and free them all in order to track down the Ghost Ship and rescue Tetra.
Spirit of Power
Leaf, the Spirit of Power. A red fairy who was held prisoner inside the Temple of Fire by a wizard-like creature known as Blaaz.
Spirit of Wisdom
Neri, the Spirit of Wisdom. A blue fairy who was sealed away inside the Temple of Wind, guarded by a giant flying Octorok known as Cyclok.
Spirit of Courage
See Ciela's folder.
Advertisement: 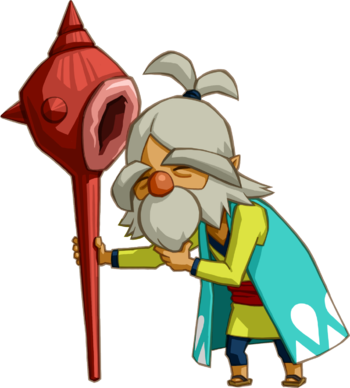 Ciela's father figure, who lives in a hut on a cliff on Mercay Island. He is a grumpy, ill-tempered Cool Old Guy.

A young pirate voyaging in search of a new land until her crew encounters the elusive Ghost Ship.

She's the same Tetra from The Legend of Zelda: The Wind Waker, and is the alter-ego of Princess Zelda. For more information on her, see that game's character sheet.

Astrid
A fortune teller who resides on the volcanic Isle of Ember.
Zauz 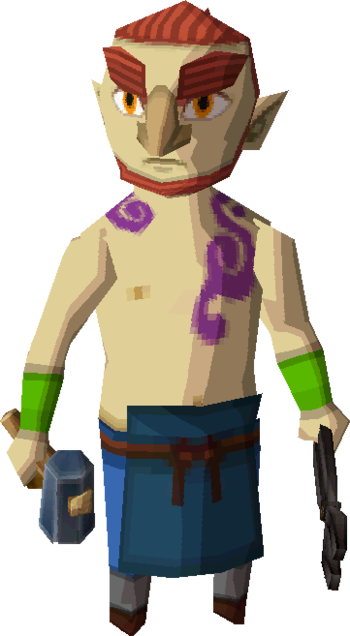 A blacksmith who has secluded himself on a lone island named after him. He helps in forging the Phantom Sword. 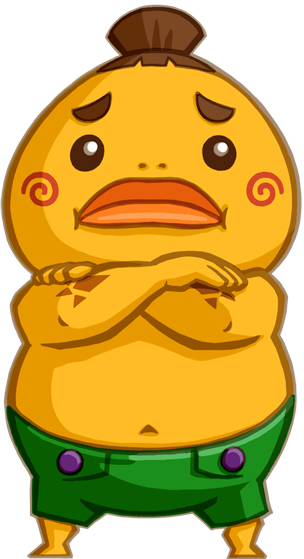 The chief of the Goron tribe and his stubborn young son. Link must prove to both of them that he's worthy of honorary brotherhood in order to claim the first pure metal, the Crimsonine.

The Anouki & Yook
A pair of feuding tribes who inhabit the Isle of Frost. The former were once the protectors of the second pure metal, the Azurine, until it was stolen and hidden away by the latter.
King Mutoh
The former ruler of the forgotten Cobble Kingdom, whose ruins occupy the far-distant waters of the northeastern sea. He's also the guardian of the third pure metal, the Aquanine, which is kept in his tomb in the basement of Mutoh's Temple. 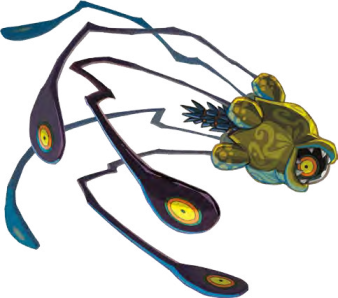 The main villain of Phantom Hourglass, Bellum is a malevolent, parasitic creature. It rose from the depths and fed on life force, trapping the Ocean King in a feeble human form while it prowled the seas for victims in a Ghost Ship. It kidnapped Tetra to feed on her life force at the outset of the game. With little characterization, Bellum seems more like a parasitic force of nature than a truly malicious villain.

Linebeck's ex-girlfiend and a wily sword-wielding pirate. Link must battle her at least twice to complete the game, and can fight her additional times to receive rewards from Linebeck. 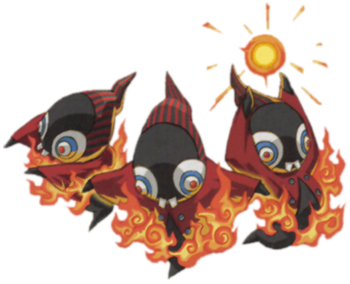 The first boss of the game situated inside the Temple of Fire found on the Isle of Ember. He imprisons the Spirit of Power: Leaf. 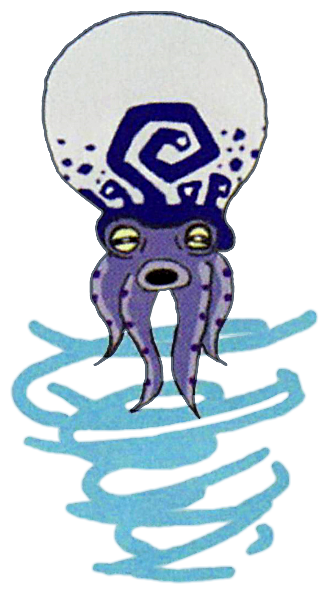 The boss of the Temple of Wind found on the Isle of Gust. He imprisons the Spirit of Wisdom: Neri. 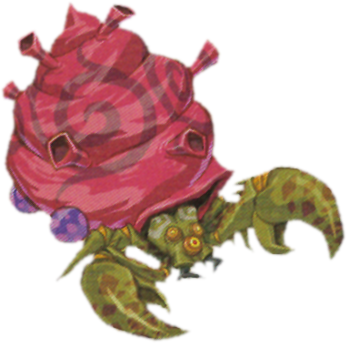 The boss of the Temple of Courage found on Molida Island. He imprisons the Spirit of Courage: Half of Ciela. 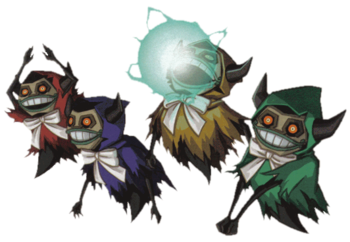 The boss of the Ghost Ship, a quadruplet of undead sisters that lead visitors astray. 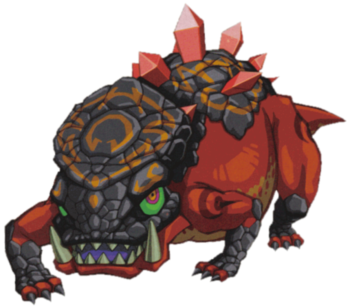 The boss of the Goron Temple, as well as the holder of the Crimsonine that Link needs to collect. 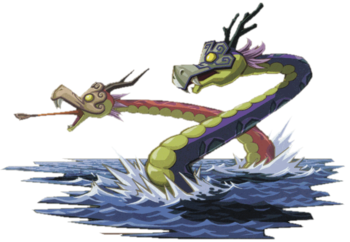 The boss of the Temple of Ice, as well as the holder of the Azurine that Link needs to collect. 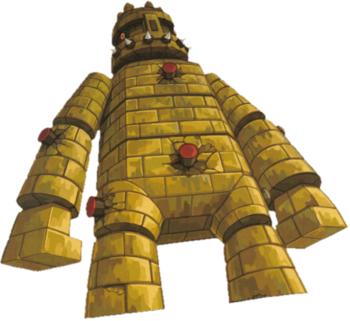 The boss of Mutoh's Temple, as well as the holder of the Aquanine that Link needs to collect.