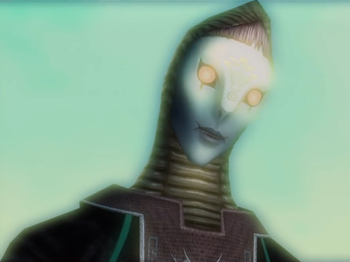 There's a reason why this game is compared to Majora's Mask in terms of how dark it is, and the ESRB gave it a T rating (the first in the series).

A decade after the game was released, Akira Himekawa was finally given permission to make a manga adaptation that manages to raise the Nightmare Fuel to frightening new heights, adding elements that manage to make one of the darkest games in the Zelda franchise even darker.

open/close all folders
The Game

Ch. 5: Those Who Emerge From Shadows

Ch. 7: The Monster That Eats Fear

Ch. 8: Towards The Twilight