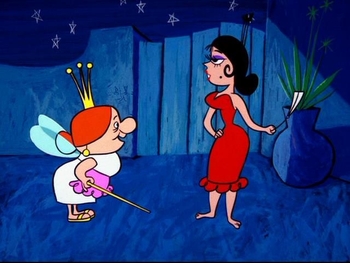 "Señorella and the Glass Huarache" is a 1964 Looney Tunes short directed by Hawley Pratt.

Essentially, it's just Cinderella set in Mexico, as told by two Mexican guys sitting at a restaurant.

This short is notable for being the final short made at the original Termite Terrace studio prior to its closure. It is the third short to use the abstract WB intro and outro from Chuck Jones' "Now Hear This", which was previously used in "Bartholomew Versus the Wheel". Because of this, all future shorts use this intro and outro.

"Señorella and the Glass Huarache" provides examples of: