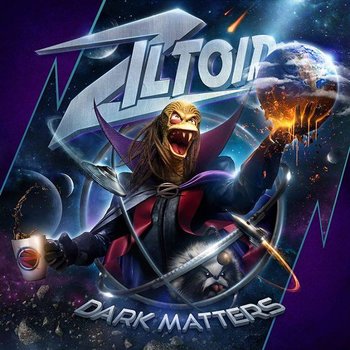 "Good evening. Come in, come in. Sit close.
We have a guest for you.
An Alien.
A creature from the fourth dimension."

Dark Matters is the second disc of Z2, the 2014 two-disc studio album by Devin Townsend, and is sequel to the 2007 album Ziltoid the Omniscient.

The album is a concept album about an extraterrestrial being named Ziltoid, who has infiltrated Earth society, pretending to be a beloved rock star in a costume, until he is outed as an alien. Meanwhile, a poozer from the planet Titan in Ziltoid's custody escapes and returns home, attracting the attention of Queen Blataria the War Princess. Now the forces of Titan are gearing to invade Earth and Ziltoid must join with the humans in protecting it and its supply of coffee.

Ziltoid commands you to read his tropes!