The son of Teo McDohl, one of the Five Great Generals of the Scarlet Moon Empire. On his first days of service to the Empire, he and his retainers get embroiled in a centuries-long conspiracy that forces them to rebel against the Empire they once swore fealty to.

Tir's retainer and servant, who follows him when the family (sans Teo, Tir's father) are forced to rebel against the Empire.

One of the retainers of the McDohl household, she flees with Tir when the household gets embroiled in a conspiracy involving the throne.

One of the retainers of the McDohl household, he harbors reservations about where his loyalties lie.

The elder brother of Odessa Silverberg, the Liberation Army's leader. A retired military strategist who left the Empire's employ out of disgust following the Kalekka Massacre, Mathiu now teaches school children in a rural village. However, the Empire's barbarism convinces him to join the fledgling rebels under Tir's command. 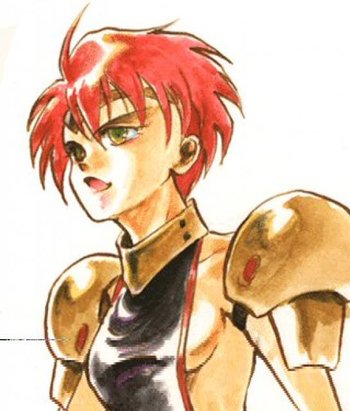 An elf who, unlike his brethren, does not harbor racism against humans or dwarves, he joins the Liberation Army to save his village and region from Kwanda Rosman's tyranny.

A shady merchant who is acquainted with Tai Ho and Yam Koo, he joins the army to help transport Fire Spears necessary to defeat Teo.

A former knight under the late Emperor Geil Rugner, he wishes nothing more than to see Barbarossa be slain. His rival, Humphrey, convinces him to join the army by allowing him the opportunity. 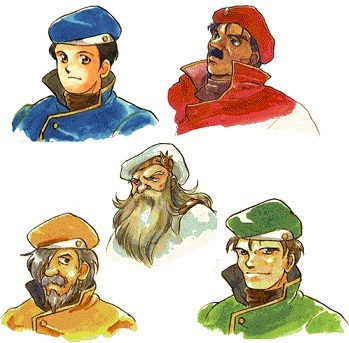 The lord of Moravia Castle who is renowned for his generosity and hospitality. Upon being freed from Kasim Hazil's occupation, he joins the army.

A soldier under Kasim Hazil's command, he is forced to join the Liberation Army when Mathiu blackmails him.

Five Great Generals
A group of powerful and highly recognized officers within the military of the Scarlet Moon Empire. The group was formerly known as "Six Great Generals", until Georg Prime left his position and haven't been replaced.

After the formation of the Toran Republic, President Lepant named Kai, Valeria and Camille as members, to replace the fallen or retired, and restored the title to "the Six Great Generals".

One of the Five Great Generals of the Scarlet Moon Empire, he terrorizes the Kobold and elf populations in the eastern portions of the Empire. However, not all is as it seems when it comes to his behaviours...

One of the Five Great Generals of the Scarlet Moon Empire, his jurisdiction expands to the Jowston Border.