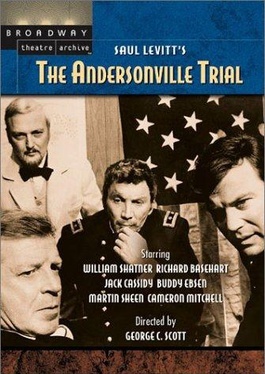 Poster for the 1970 movie version.
Advertisement:

The Andersonville Trial is a 1959 play based on the 1865 trial of Captain Henry Wirz on conspiracy and murder charges. During the trial, Colonel Norton P. Chipman and Otis Baker duked it out in court with Wirz's fate on the line, and ultimately the issue of Just Following Orders is brought up.

A television adaptation was produced as the pilot episode of KCET's Hollywood Television Theatre in 1970, directed by George C. Scott (who portrayed Chipman in the original production) and starring William Shatner as Chipman, Jack Cassidy as Baker, Richard Basehart as Wirz, Cameron Mitchell as General Lew Wallace, and Buddy Ebsen as a witness describing the horrors to which Andersonville's prisoners were subjected.

This play features examples of: