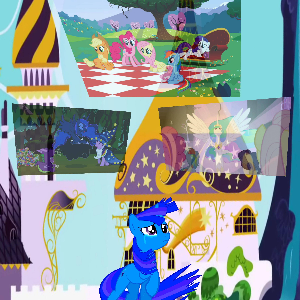 My Choices: Twisted Tales Through Time

is a My Little Pony: Friendship Is Magic Fan Fic written by koolerkid.

In the process of looking for clues as to the cause of Nightmare Moon's rise, Twilight Sparkle accidentally gets Trapped in the Past. After realizing the opportunity her position presents, she resolves to prevent Luna from becoming Nightmare Moon in the first place.

Meanwhile, in the Future…, Twilight Sparkle discovers a prophecy which talks about the imminent return of a malevolent entity called Darklight Star, who fought the two Princesses a thousand years ago before getting imprisoned in the North Star.