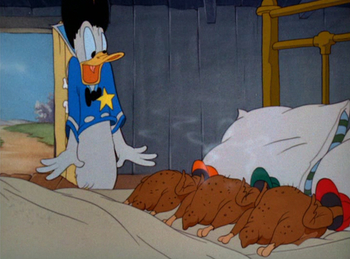 Donald Duck is, no prizes for guessing correctly, a truant officer. He has tracked down Huey, Dewey, and Louie to a pond where the boys are swimming and having a good time. Donald promptly arrests them. As he's taking them to school in his paddy wagon, the boys cut their way out and flee to their clubhouse. The latter portion of the cartoon is a battle featuring Donald laying siege to the clubhouse, trying to catch the boys, while they try to outwit him.