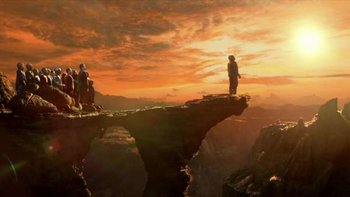 This is the ceremonial Moclan urination. There's a perfectly ordinary sentence.
It's time for Bortus to have his Ja'loja, a very important Moclan ceremony. In other words, he has to pee. So the Orville heads for Moclus. On the way, the crew deal with a bevy of personal problems, from love troubles to parenting issues.