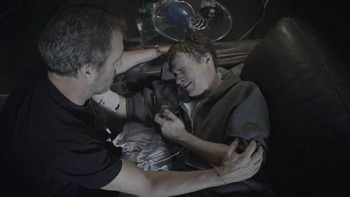 I'd rather die here, not in the hospital...
"LIFE IS PAIN! I wake up every morning in pain! I come to work in pain! Do you know how many times I wanted to just give up?! How many times I thought about ending it?!"
— Gregory House, M.D.
Advertisement:

As much of a apathetic cynic House can be, life still finds a way to emotionally break him, both in and out of the hospital clinic.