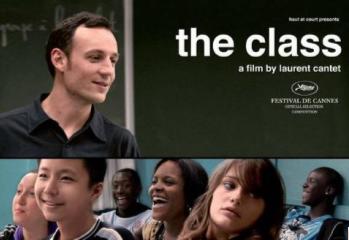 A 2008 French film ("Entre les Murs" in the original, meaning "Between the Walls"). The character of the protagonist is largely based on the experiences of the French and literature teacher François Bégaudeau in a school in an arrondissement of Paris. It shows his struggles with the often difficult but also very likeable and interesting kids. Bégaudeau himself plays the role of the teacher M. Marin. It's also almost like watching a documentary, it feels as if you're actually peeking into the classroom.

The film won the Palme d'Or at the 2008 Cannes Film Festival, as well as some other awards and making it into many top 10 of 2008 lists.