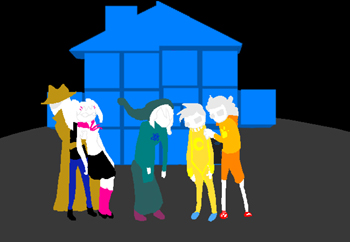 You’ve finally done it. After hundreds of hours of play, level after level, trial after trial and death after death, you and your friends have succeeded. You have beaten sburb, and stand on the cusp of your reward.

However, instead of creating a new universe, something you and your friends did during the session has triggered an alternate victory; a NEWGAME+ and the universe you enter is your own, at the moment of your birth. IT KEEPS HAPPENING.

But even if you did remember it, this would not be the SBURB you played before.

is a currently ongoing Homestuck role play. Hosted on the MSPA forums it follows 6 kids who get together to play a video game that will change their lives. Little do they yet realize that they have played this game once before.

A combination of Second-Person Narration, pesterlogs and artwork, NEWGAME+ can be read as own world