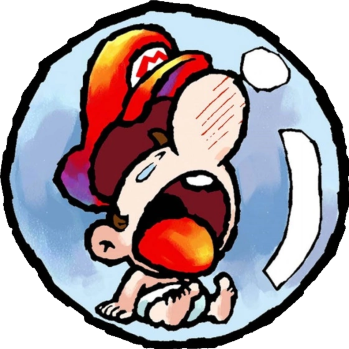 Look, kid, I don't care if you're going to grow into one of the most influential characters in video game history, just SHUT. UP.
"Don't worry if you're not keen on scavenger hunts, though, because the presence of a nearby invisible thing is helpfully indicated by the soundtrack going "BDEEP BDEEP BDEEP BDEEP BDEEP" while you're still trying to clear the room of those fucking insidious scuttlefuck spawners — BDEEP BDEEP BDEEP BDEEP BDEEP!"
— Zero Punctuation on The Conduit
Advertisement:

Most Video Games use audio cues as well as visual cues to let the player know what is going on around them. However, in some games these audio cues become an extreme annoyance to the player, either intentionally or thorough repetition. These sounds disrupt gameplay and force the player to focus on the sound instead of the game itself. Many gamers choose to disable the volume just to avoid hearing that sound again. And God forbid if you have misophonia over it. One execution of that sound effect can give you PTSD or nightmares for months.

In order for one of these sounds to be a Most Annoying Sound, it must fall into one of the following categories; otherwise it's just personal dislike:

Alternative Title(s): The Most Annoying Sound