Recap / My Little Pony: Friendship Is Magic S9 E18 "She Talks to Angel" 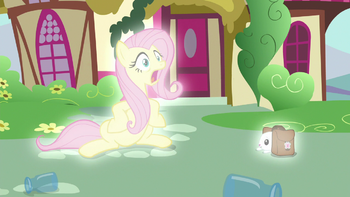 It's Freaky Friday between a pony and her rabbit.
"Am I a pony? Why am I a pony?!"
— Angel (in Fluttershy's body)
Written by Nick Confalone
Advertisement:

Fluttershy holds a predator/prey support group in her animal sanctuary, but Angel keeps disrupting it. In spite of Angel, Fluttershy gets Antoine the python to stop trying to eat Muriel, a baby elephant with an injured trunk. Throughout the day, Angel keeps wanting attention from Fluttershy, but she has a long list of chores to get through with Dr. Fauna, and keeps brushing Angel off. Finally, Angel gets into her supply closet, wanting some concentrated carrot extract, but Fluttershy refuses to let him have it. Angel's frustrations boil over, since he's upset that not only will Fluttershy not pay attention to him, but that she's the only one who can understand him. Meanwhile, Fluttershy is getting increasingly annoyed with what she feels is Angel's needy behavior, since she has to do a lot of hard work for every animal in her sanctuary, and Angel gets to just freeload off of her.

Zecora arrives at the sanctuary with a small smoke-breathing lizard, asking for Fluttershy's help. Zecora sees the impasse that Fluttershy and Angel are in, and offers to help. She brews up a magic potion in her hut, then tells Angel and Fluttershy to only drink it when they're alone together and back at her sanctuary. In Ponyville, Angel loses his patience and just drinks his half of the potion anyway. Not wanting to waste it, Fluttershy also drinks hers, causing Angel and Fluttershy to switch bodies from Zecora's spell.

Back at the sanctuary, Angel-as-Fluttershy's apathy for anyone else's concerns results in Antoine eating Muriel. Only then does Angel-as-Fluttershy explain what's going on to Dr. Fauna and the animals, causing them to come up with a plan to free Muriel from Antoine's belly. Zecora arrives with Fluttershy-as-Angel, her exhaustion leaving her unable to even move. Finally realizing how hard she's been trying to help, Angel-as-Fluttershy gets the concentrated carrot extract from the supply cabinet and uses it on Fluttershy-as-Angel, making her wake up. Once she does, Fluttershy and Angel admit to each other that they both have difficulties and frustrations that the other didn't anticipate, and hug each other in understanding. This causes them to switch back to their normal selves.

Fluttershy holds another predator/prey therapy session, this time without interruption. Dr. Fauna also mentions that Zecora's lizard didn't have any trouble; it was a fire-breathing lizard, and needed more food to not cough up smoke. However, Dr. Fauna has Zecora promise to never do anything like the body swap again.