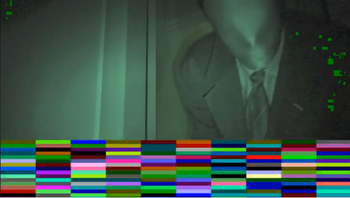 PRAY TO YOUR GODS
The Town That Never Existed is a webseries in the Slender Man Mythos. The plot follows a student named Charles Ulysses, whose friend Darren was investigating an urban legend about a town that doesn't exist, called Ashton. Darren planned a visit to the site of the alleged town, gave Charles the coordinates, and was promptly never seen or heard from again. Charles decided to follow the coordinates he was given in an attempt to discover what had happened to his friend.

This proves to be a very bad idea.

One fairly unique element of the series is that, every several weeks, the videos all disappear and new ones showing similar events show up. It is heavily implied that these events surrounding by the town are stuck in a cycle of occurrence and re-occurrence that shows no sign of stopping any time soon. However, certain elements do change between iterations.

The series has been deleted from YouTube, and as far as anyone can tell, there's no mirrors or (public) archives of it anywhere. The only remaining proof that it ever was on YouTube is the Wayback Machine's archive of the channel

(albeit without any way to actually watch the videos). Aside from that, for the time being, it is...The Series That Never Existed.

Unlike the town, spoilers DO exist. Tread with caution.