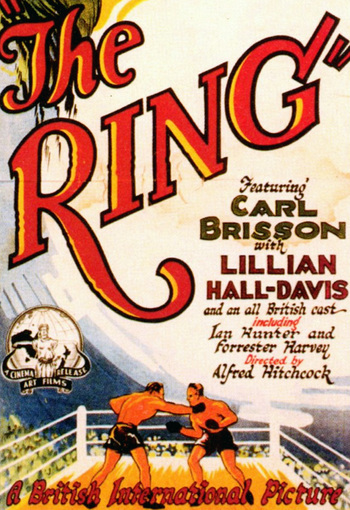 The Ring is a 1927 silent film written and directed by Alfred Hitchcock that does not, repeat not, feature a Stringy-Haired Ghost Girl.

No, this isn't The Ring; the ring is a boxing ring. "One Round" Jack Sander is a boxer working at a carnival, taking on all comers. His girlfriend Mabel sells tickets to his fights. One day a tall man accepts the challenge, hops into the boxing ring, and shocks both Jack and Mabel by defeating Jack in four rounds. It turns out that the nattily dressed tall gentleman is Bob Corby (Ian Hunter) the heavyweight boxing champion of the world. Bob and his manager, spotting Jack as a real talent, give him a job as Bob's sparring partner.

However, at least part of the reason that Bob hired Jack was Bob's attraction to Mabel, which Mabel returns, even after she gets married to Jack. Jack's rise through the heavyweight ranks becomes bittersweet when Mabel leaves him for Bob. Eventually Jack winds up fighting Bob for both the title and his wife.