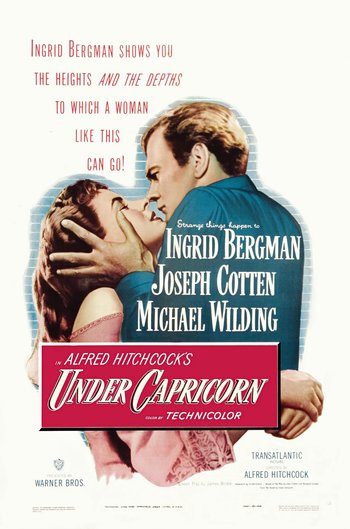 Under Capricorn is a 1949 Costume Drama film adapted from the 1937 novel of the same name by Helen Simpson, directed by Alfred Hitchcock and starring Michael Wilding, Ingrid Bergman, Joseph Cotten, and Margaret Leighton.

The story is Historical Fiction with both romantic and tragic elements. It takes place in 1831–32 New South Wales, then the primary British colony in the Land Down Under. The film opens with the arrival of new governor Sir Richard (Cecil Parker) in Sydney. The novel specifies that the date is December 3, 1831 and the governor is Sir Richard Bourke (term 1831–37). He is an Irishman (Bourke was from Dublin) and has brought along his second cousin, Charles Adare (Wilding). Charles, the youngest child of a Lord with no claim to the family's wealth, has come to Australia to seek his fortune. He meets bank manager Cedric Potter (John Ruddock) to discuss his prospects.

Potter has nothing to offer him. But Charles has a chance meeting with Samson "Sam" Flusky (Cotten), a prosperous landowner. Sam has a business proposal for him. He has a certain problem of his own. He is unable to purchase further land properties from the government. He wants to finance Charles in purchasing land as his proxy. Flusky invites Adare to his house to seal their deal. The Irishman already knows that his new patron is an ex-convict and Self-Made Man. His visit helps him realize that Sam is a brooding loner with a Dark and Troubled Past, shunned by polite society.

He is introduced to the two women important to Sam. The first is his wife. Adare is surprised to recognize Lady Henrietta "Hattie" Considine (Bergman), a fellow aristocrat and family friend of his, who had eloped with her riding instructor. Evidently Samson is said instructor. He learns that Samson's crime was killing her brother Dermot in a duel. He had been sentenced to seven years of imprisonment in Australia. Henrietta left her family and fended for herself while waiting for his release. The years of hardship took their toll. She is still beautiful but a Lady Drunk. Lately she has been suffering from Hallucinations and might be losing her sanity, The other woman is Milly (Leighton), the housekeeper. She is a Hypercompetent Sidekick type who keeps the household staff in order. Her employers have come to rely on her more and more over the years. She is devoted to Sam but openly disdainful of Henrietta. She has also largely supplanted Henrietta as the Lady of the House. Milly is infatuated with Samson and would like to be his second wife. The hallucinations of Henrietta may be the result of an old-fashioned Gaslighting operation.

Adare reminds Hattie of happier times and keeps her lucid. Sam invites him to settle in the Flusky mansion, effectively hiring him to help Hattie get back on her feet. This involves Charles playing dress-up with his own living doll, getting her to clean up nicely, restoring her confidence in herself and formally introducing her to Sydney society. There are signs of a Pygmalion Plot, with Charles stealing a kiss from his reluctant "student". Within the household, Henrietta wants to resume her domestic duties and gets into a power struggle with Milly. Milly does her best to point out to Mr. Flusky about Henrietta and Charles spending quality time in Henrietta's bedroom. And how that new dance, waltz, involves the Lady spending time in her partner's embrace. Samson turns into a Crazy Jealous Guy. There is conflict about to erupt.

The film was a box office flop at the time of release. The main reason being that it is not the thriller audiences had come to expect of Hitchcock. There are certain elements of it. Minyago Yugilla, the Flusky mansion, may be luxurious. But it is also ominous-looking and it gives locals the creeps. There is also a Gaslighting operation in effect, a decapitated head is left at Henrietta's bed and there is a poisoning scene. But otherwise it is a verbose drama. But its use of long takes makes for frequent lovely images. The performances of Bergman and Leighton have been praised. For the French New Wave creators of the 1950s, it was a highly influential film and a darling of the critics. Opinion remains highly divided on the film's quality. It has been hailed as a masterpiece and dismissed as a flop. Ranked by serious critics both among the best and the worst of the director.