This page details the secondary characters of Bloodborne. Head back through here for the other character pages. Warning: unmarked spoilers ahead. 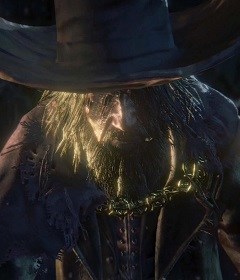 "Oh yes, pale blood...heh. Well, you've come to the right place, Yharnam is the home of blood ministration. You need only to unravel its mystery. But where's an outsider like yourself to begin? Easy, with a bit of Yharnam blood of your own. But first, you need a contract."
Voiced by: Peter Pacey

An old, wheelchair-bound man who is the first person you meet upon your journey. He administers the Yharnam blood into you shortly before the nightmare begins.

"Oh you must be a Hunter, and not one from around here either. I'm Gilbert, a fellow outsider. You must have had a fine time of it. Yharnam has a special way of treating guests."
Voiced by: Daniel Fine

A sickly man holed up in the house beside the Central Yharnam lamp post. 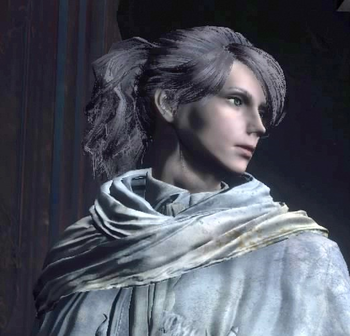 "Are you... out on the Hunt? Then I'm very sorry, but... I cannot open this door. I am Iosefka. The patients here in my clinic must not be exposed to infection. I know that you Hunt for us, for our town, but I'm sorry."
Voiced by: Jenny Funnell/Lucy Briggs (impostor)

The owner of the Clinic you start in. She reappears in her clinic after you first enter and leave the Hunter's Dream, and offers you vials of blood plasma and kind words of encouragement. After defeating the two bosses of Central Yharnam, she is willing to offer sanctuary to those still caught inside during the Hunt.

"I've heard, I have. Shutting up indoors isn't always enough. If you Hunters got off your arses, we wouldn't be in this mess. You're obligated to help me, you hear?"
Voiced by: Tilly Vosburgh

A cranky old woman whose initial hiding spot is being assaulted by one of the feral hounds. Asks if you know of a safer spot to hide.

"Who...are you? I don't know your voice, but I know that smell...Are you a Hunter? Then, please, will you look for my mum? Daddy never came back from the Hunt, and she went to find him, but now she's gone, too... I'm all alone... and scared..."
Voiced by: Bo Chapman-Hailey (Young Girl), India Chapman-Hailey (Older Sister)

A pair of young girls associated with a certain Hunter's residence. The younger of the two asks you to look for her mother, Viola, while the older of the two appears after the Blood Moon appears searching for her younger sister. 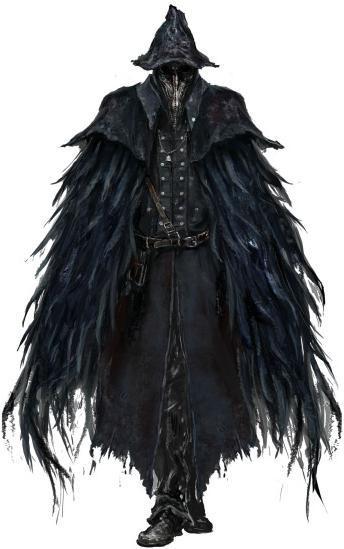 "Prepare yourself for the worst. There are no humans left. They're all flesh-hungry beasts, now."
Voiced by: Jacqueline Boatswain

A huntress. She has taken an oath to serve as the Hunter of Hunters and journeys across Yharnam, killing Hunters who have become addled by the blood. 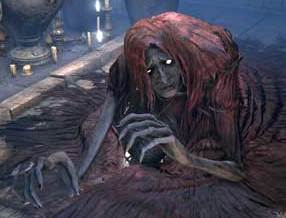 "Ahh, the Hunter. Alive and well, are ya? This here's a safe place. Stay as long as you like. But... next time you're out on a Hunt, remember what I asked. If you find any sane survivors, tell 'em to seek shelter at Oedon Chapel. Cause there's nothing to fear here... ha, hah ha!"
Voiced by: Daniel Fine

A blind, decrepit man in a red shawl found within the Old Oedon Chapel. He asks you to send civilians caught up in the Hunt to the Chapel. 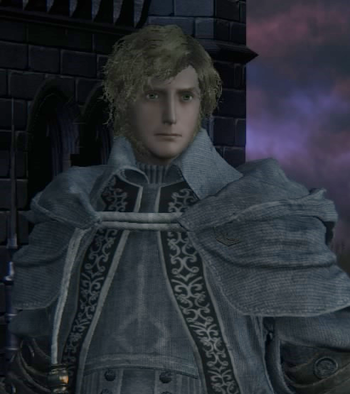 "You're a Hunter, aren't you? I knew it. That's precisely how I started out! Oh, beg pardon, you may call me Alfred. Protege of Master Logarius, Hunter of Vilebloods. So, what say you? Our prey might differ, but we are Hunters, the both of us. Why not cooperate, and discuss the things we've learned?"
Voiced by: Daniel Flynn

A member of the Executioners, a fanatical partition of the Healing Church dedicated to eradicating the Vilebloods of Cainhurst. By technicality, he's also an Old Hunter, carrying an Old Hunter Bell.

Arianna, Woman of the Night 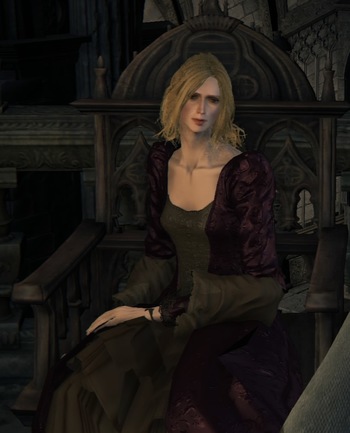 "I'd like to tender my thanks, but I haven't much to offer...all I can give is my blood. But would you even take a whore's blood?"
Voiced by: Pooky Quesnel

A prostitute living in the Cathedral Ward. 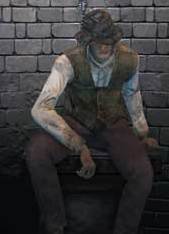 "You... you're not from around here are ya? An outsider who's come to join the Hunt? What a pathetic idea. You what? What, you think I'm a beast? Well, maybe I think you're a beast. And step away from my castle!"
Voiced by: Lee Whitlock

A paranoid xenophobe living across from Arianna.

"You there, Hunter. Didn't you see the warning? Turn back at once. Old Yharnam, burned and abandoned by men, is now home only to beasts. They are of no harm to those above. Turn back...or the Hunter will face the Hunt."
Voiced by: William Houston

An old Hunter from the time that Old Yharnam was burned in cleansing fire by the Healing Church. Djura keeps watch over the torched husk of a city, protecting the beasts that remain. He belongs to the Powder Kegs, a heretical sect of the Workshop who favored somewhat unwieldy but extremely powerful weapons.

"Blimey! Don't scare me like that. On a night like this... I took you for a monster. Oh, thank the stars, you're fairly normal... Was it you put down that awful beast? Oh, that thing had me be trembling, frozen in me boots. And then you came along. Well... if you're a Hunter... then... Would you know of any safe havens?"
Voiced by: Peter Pacey

A bandage-wrapped man found within the Forbidden Woods. 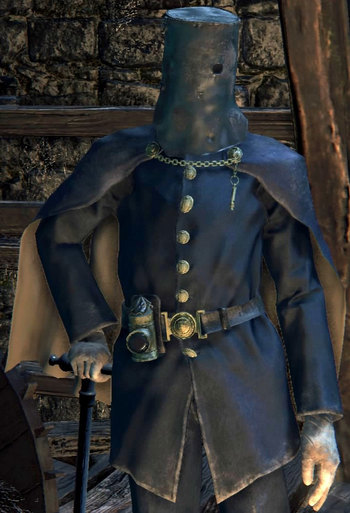 "Ahh, a new face, are you? And an accomplished Hunter... it would appear. I am Valtr, Master of the League. Members of the League cleanse the streets of all the filth that's spread about during the Hunt. Like any half-decent Hunter ought to, you know? Haven't you seen enough of the wretched beasts, freakish slugs, and mad doctors? Sentence these fiends to death. With the help of your League confederates. What do you say? Why not join the League?"
Voiced by: Jason Pitt

The leader of the League, a band of Hunters that seek out and destroy "Vermin": centipede-like creatures that live in filth and are believed to be the source of man's impurity. 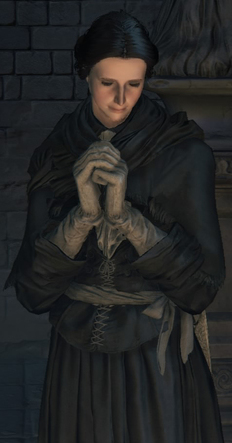 A member of the Healing Church, captured by the Kidnappers of the School of Mensis. 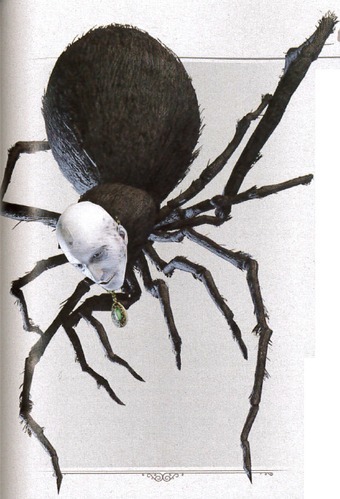 "Remember: no matter the circumstances, there will always be people willing to push you down a hole."
Voiced by: William Vanderpuye

A human-faced spider that worships the Amygdala found around Yharnam.

Annalise, Queen of the Vilebloods

Annalise, Queen of the Vilebloods 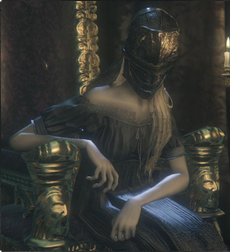 "I am Annalise, Queen of Castle Cainhurst. Ruler of the Vilebloods, and sworn enemy of the Church."
Voiced by: Jenny Funnell

The last remaining noble of Cainhurst, Annalise is hidden away in a secret chamber deep within Cainhurst Castle. 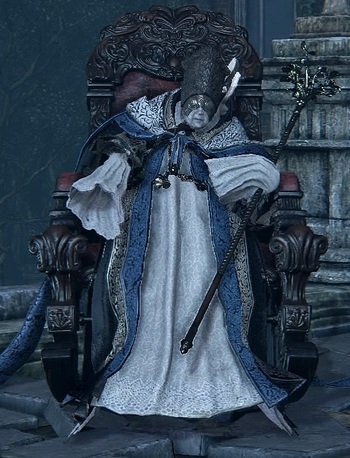 "We are born of the blood, made men by the blood, undone by the blood. Our eyes are yet to open...Fear the old blood."
Voiced by: Steven Elliot

Alternatively known as Master Willem. The former head of the now-defunct Byrgenwerth College, his teachings would eventually lead to the founding of the Healing Church. Even though the Church has declared the College forbidden ground, some say he still resides there, gazing out at the lake in his rocking chair.

"I tell you, I will not forget our adage."
Voiced by: Daniel Fine

A man introduced in a flashback cutscene, implied to be a former student of Master Willem and the founder of the Healing Church.

A member of the Brygenwerth faculty, Caryll was a runesmith for the College who transcribed the voice of the Great One Oedon. Most of the works have been secreted away, some even forbidden and considered heretical.

For info on his Boss Battle, go to Bloodborne Characters From The Old Hunters.

An eccentric inventor associated with the Healing Church workshop. He was obsessed with darkbeasts and the electricity that they could generate with their bodies, and is credited with the creation of the Tonitrus line of weapons.

A Hunter from years past who was fascinated by the darkbeasts, creating the Beast Claw trick weapon and the Beast Roar Hunter's tool.

A Huntress of the Healing Church initially found in the Cathedral Ward. Her initial summon sign is near the shortcut to the Grand Cathedral.

A Madman that can be summoned in various locations and Chalice Dungeons, especially Lower Pthumeru Layer 3.

A member of the School of Mensis, Damian can be found in various locations and Chalice Dungeons, especially in the Altar of Despair.

One of the few remaining Tomb Prospectors, Olek and Gremia are key allies in many of the Chalice Dungeons.

A mysterious, unnamed Executioner found in a few chalices. It's suggested he's responsible for slaying another queen in his past life, suggesting that there were other queens before Annalise.

As the name implies, Antal is a defector of the Yahar'gul Hunters, who respond only to the School of Mensis. He can be found within the Yahar'gul boss fights, Darkbeast Paarl, and The One Reborn.

One of the few remaining Old Hunters not trapped in the Hunter's Nightmare. Vitus can be found in the higher tier Chalice Dungeons.

Powder Keg Hunter equipped with Beast Claws and a follower of Irreverent Izzy, he can be found in the higher tier Chalice Dungeons.

The younger brother of Madaras Twin, known for keeping a serpent in the Forbidden Woods.

The taciturn old Hunter Henryk was once partners with Father Gascoigne, and though they were a fierce and gallant duo, their partnership led to Henryk's tragically long life.