Characters / Bloodborne Characters From The Comic

This page details characters who first appear in the Titan Bloodborne comic. Head back through here for the other character pages. Warning: unmarked spoilers ahead. 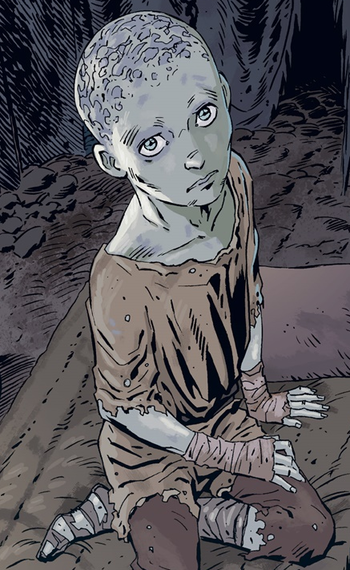 Child. Listen. We must go on a journey... and leave the nightmare.
Child: The Beast is gone
Hunter: How—
Child: I made it leave.

An unnamed child introduced in Issue 1 of the comic. Djura implores the Hunter to escort them to safety. This child possesses the Paleblood that the Hunter has been searching for, and has a vague connection to the beasts of the Nightmare and possibly even the Moon Presence itself.

The Hunter
"I am a Hunter."

A nameless Hunter from before Yharnam got quite as bad as it is in the game. Djura implores them to take the Child out of the Nightmare, and they oblige.