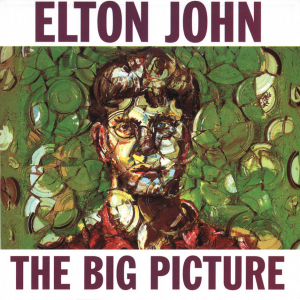 And tell me do I fit in the big picture
Do I have a shot at the big part?
I can't control this flesh and blood
That's wrapped around my bones
It moves beneath me like a river
Into the great unknown

I stepped onto the moving stairs
Before I could tie my shoes
Pried a harp out the fingers of a renegade
Who lived and died the blues
—"Live Like Horses"
Advertisement:

The Big Picture is the twenty-fifth studio album recorded by English pop rock musician Elton John. It was released through Rocket Records on 22 September 1997.

Elton and Bernie Taupin decided to add a bit more of an orchestral flair to their music with this album, with string arrangements set up by composer Anne Dudley and Elton's backup keyboardist, Guy Babylon. This was inspired by a non-album duet Elton recorded with opera maestro Luciano Pavarotti, "Live Like Horses"; a solo version of this song appears on this album.

In hindsight, Bernie considers this his least favorite of Elton's albums. He considers the production "abysmally cold and technical".

Indeed, critical reception was lukewarm. But the album's release ended up hijacked by current events. Three weeks prior, the former crown princess of the United Kingdom, Princess Diana, died in a traffic accident.

Elton would re-write "Candle in the Wind" in her honor, and play the song at her funeral. "Candle in the Wind 1997", also titled "Goodbye England's Rose", was made a double A-side single with a song from this album, "Something About the Way You Look Tonight".

It would help drive this album commercially. The Big Picture ultimately went Platinum in the US and UK, and hit the Top 10 on both the Billboard 200 and Official Charts Company album charts.

Two other singles were released from the album: "Recover Your Soul", and "If the River Can Bend". Both were Top 40 hits in the UK. Though it was originally released in 1996, "Live Like Horses" is also listed as a single for this album; it hit #9 on the UK Pop chart.

"And I can't explain, but there's something about the way you trope tonight:"