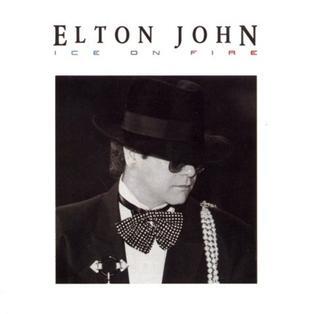 Ten of your tin soldiers in a row
With eyes that looked like ice on fire
There are ladies, illegal X's
Mona Lisas, well connected
They may be shady, English roses
Blue blooded, turned up noses

Money talks, see what it catches
Postage paid, no strings attached
She's a honey, she's a tramp
Roaring twenties, molls and vamps
"Wrap Her Up"
Advertisement:

This album was recorded as Elton was warming up to participate in the English staging for Live Aid. But a big problem for the next two albums was going to be increasing cocaine use. And he was beginning to get saturated in the market, as sales would prove.

Rolling Stone didn't even bother to rate the album. AllMusic rates it only 2.5 out of 5 stars. It went Platinum in the United Kingdom, reaching #4 on the Official Charts Company album chart. It went Gold in the United States, but only hit #48 on the Billboard 200 album chart

The album was reissued by MCA Records for release in North America in 1992. The reissue added the CD-exclusive track "Act of War" to the other versions. It was reissued again by Mercury Records in 1999 with three added live tracks and a new song, as well as an extended mix of the song "Satellite", though it excised "Act of War" again.

"But the kids just watch the tropes:"