Music / Too Low for Zero 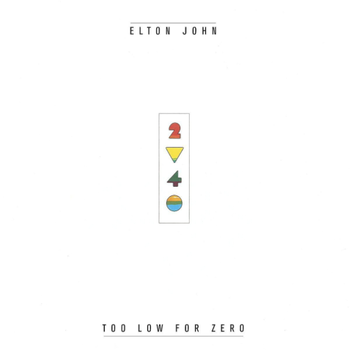 And did you think this fool could never win?
Well look at me, I'm a-coming back again
I got a taste of love in a simple way
And if you need to know while I'm still standing, you just fade away
"I'm Still Standing"
Advertisement:

Elton was in an extended slump in his career. For his previous four albums, he'd scored only two Silver records from the BPI and two Gold records from the RIAA between them; and only one song, "Little Jeannie" from 21 at 33, has endured from that span. He decided to cut out the secondary writers and work on this album entirely with his long-time writing partner Bernie Taupin, going back to the basics.

It was a decent effort, though contemporary critics were skeptical. Don Shewey of Rolling Stone rated the album 3 out of 5 stars, criticizing a lack of consistency in the output, but also noting the high energy of its singles. In hindsight, AllMusic would rate the album 4.5 out of 5 stars, showing the album would stand the test of time; AllMusic reviewer Bill Janovitz has said as much specifically about "I Guess That's Why They Call It the Blues", which remains one of Elton's most popular singles.

Commercially, it gave Elton's career the boost it needed to catch him back up to The '80s. It went Platinum in both the United States (first since 1978) and the United Kingdom (first since 1973). It was his first album to hit the Top Ten on the UK album chart since A Single Man in 1978.

"And I guess that's why they call these the tropes:"