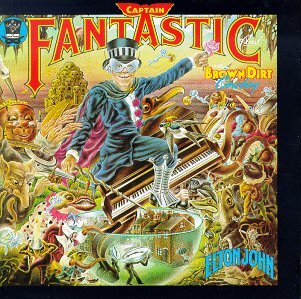 Raised and regimented, hardly a hero
Just someone his mother might know
The full moon's bright
And starlight filled the evening
We wrote it and I played it
Something happened it's so strange this feeling
Naive notions that were childish
Simple tunes that tried to hide it
But when it comes
We all fall in love sometimes
"We All Fall in Love Sometimes"
Advertisement:

The music was composed on a ship voyage from England to New York. He and writing partner Bernie Taupin ultimately put together a Concept Album which told the story of their work in the 1960s, leading up to the moment Elton truly became a big name in music.

For those curious, Elton was Captain Fantastic, and Bernie was the Brown Dirt Cowboy.

The journey of its production ultimately led back to Caribou Ranch in Colorado. It took almost a full month to produce the album; a very long time, by their standards, and far longer than his immediately previous work.

The album was an unprecedented smash that did something no album had ever done before: debut at the top of the Billboard 200 album chart. It sold 1.4 million copies in its first four days of release, and topped the Billboard 200 for seven straight weeks from release. It ultimately went triple-Platinum in the United States, and finished at #7 on the year-end chart for 1975.

The album only had one single: "Someone Saved My Life Tonight". It hit #4 on the Billboard Hot 100 (certified Gold by the RIAA), and #22 in the UK.

In 1976, the name would be lent to a pinball game, Bally's Captain Fantastic. It was inspired by the 1975 film version of The Who's Rock Opera, Tommy. Elton would perform "Pinball Wizard" in the film, and his appearance in the film would be used in the pinball machine's art.

"Someone troped my life tonight:"