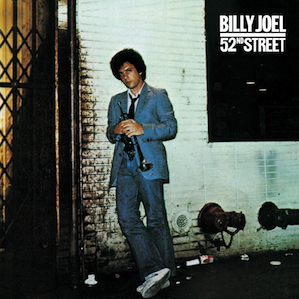 But if we shift the rhythm into overdrive
Well, we could generate a lot of heat on 52nd St.
I don't need you to worry for me 'cause I'm alright
I don't want you to tell me it's time to come home
I don't care what you say anymore, this is my life
Go ahead with your own life, leave me alone
—"My Life"
Advertisement:

52nd Street is the sixth studio album released by American singer/songwriter/pianist Billy Joel. It was released through Columbia Records on October 11, 1978.

After the breakthrough success of The Stranger, Joel wanted a fresh sound for its successor. With Phil Ramone returning as producer, he hired jazz musicians to back him. The album is named for the Manhattan street that was the center of live jazz in the 1930s and 1940s, with a dozen or more clubs between Fifth Avenue and Seventh Avenue. In addition, his record label's headquarters and the studio where he recorded the album were both located on 52nd Street.

The album became his first to reach #1 on the Billboard 200 album chart, holding the position for eight weeks. It also hit #10 on the Official Charts Company album chart. It went seven-times Platinum in the United States, and Gold in the United Kingdom, topping the year-end Billboard 200 for 1978. It received the Grammy Award for Album of the Year, as well as for Best Pop Vocal Performance - Male.

The album was supported by three hit singles: "My Life", "Big Shot", and "Honesty". All three were Top 20 hits on the Billboard Hot 100, with "My Life" peaking at #3, matching his highest appearance on the US Pop chart. "Until the Night" was also released as a single in the UK, but not in the US.

Four years after its release, 52nd Street would gain the distinction of being among the first 50 titles released on the Compact Disc format when it debuted in Japan on October 1, 1982. The album was the earliest-indexed title in this launch lineup, and as such is frequently described as the first album to be released on CD (though not the first to be pressed on one; that's another can of worms entirely). 34 years later, when Sony returned to manufacturing vinyl records, 52nd Street would be picked again as the first album to roll out of their new record pressing plant in 2016.