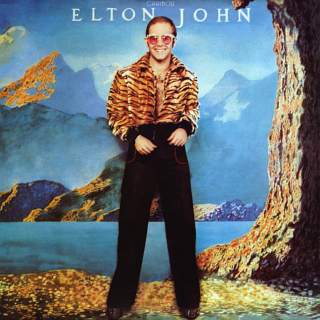 Eat meat on a friday that's alright
Even like steak on a saturday night
I can bitch the best at your social do's
I get high in the evening sniffing pots of glue
—"The Bitch is Back"
Advertisement:

Compared to his blockbusters of 1973, this album was rushed, being developed over barely more than a week in January 1974. With some work in London and Los Angeles, it was largely recorded at Caribou Ranch in Colorado. Elton and his band were being rushed to tour Japan.

Even Elton doesn't think it's his best work. Tom Nolan of Rolling Stone referred to it as "dispiriting", and lacking focus almost throughout. Stephen Thomas Erlewine of AllMusic recalls it as a disappointment besides its two singles.

Those two singles were "Don't Let the Sun Go Down on Me" and "The Bitch is Back". Respectively peaking at #2 and #4 on the Billboard Hot 100, they helped drive the album to be Elton's third consecutive number-one studio album on the Billboard 200 album chart. They both faltered in the teens on the UK pop chart.

The album itself would ultimately go double-Platinum in the United States, and Gold in the United Kingdom. It would stand in the top half of the year-end Billboard 200 album chart in both 1974 (#65) and 1975 (#77).

"Someone troped you something satanic:"